The biggest issue with these charts is what they don’t show.

While all these charts show recommended fingerings for each note, they don’t give you all the possibilities.

You will see that some notes have numbers underneath them. These numbers show that a particular harmonic will be flat (shown by the “-” sign) or sharp (shown by the “+” sign). The number denotes cents from equal temperament (there are 100 cents in a half-step).

Here’s why it’s so important to know your harmonic series:

Take a look at the line for an open F horn (in the middle of the page, labeled “F 0”. You can see that you have all the expected open notes but if you look between the 6th and 8th harmonics, you’ll see something unexpected. This 7th harmonic Bb is a “hidden” note – it’s pitch is very flat, so Bb is almost never played open – but it’s there.

If you’re slurring a C major arpeggio, you must use extra caution (and airspeed) between that G and C to miss the Bb.

Now take a look at the third line (Bb 1). Notice the note between the 6th and 8th partials, and think about the opening to the 2nd movement of Mozart’s 3rd horn concerto. Knowing that there is a “hidden” note between those two notes suddenly makes the slur a whole lot easier!

The first, and most obvious, is if you’re playing on a single F horn. You’ll need to know these fingerings.

However, even if you are playing a double horn, you should still memorize at least the two octaves from G below to G above the staff. The reason, of course, is for hand stopping.

As you probably know, the general rule for stopped horn is to finger notes one-half step lower than normal on the F side. To do this, you obviously need to know all of your F horn fingerings!

Standard Bb single horns generally have 4-valves, the three “main” valves and a thumb key for a ¾ tone stopping valve (halfway in length between the 1st and 2nd valve slides). The stopping valve allows you to play noted on the Bb horn without transposing, using regular fingerings (plus the stopping valve).

However, some Bb horns have an A/stop thumb valve (which makes playing in certain keys easier), while others also have an F-extension (which adds about 3 feet of tubing to make open F horn notes easier to play).

These extra valves, if present, may be combined (A/stop valves are common, with the valve function determined by the slide pull, or a combined A/stop/F extension with the manual turn valve) or separate (A/stop valve controlled by the thumb, while the F extension is either an additional thumb key or a pinky key). 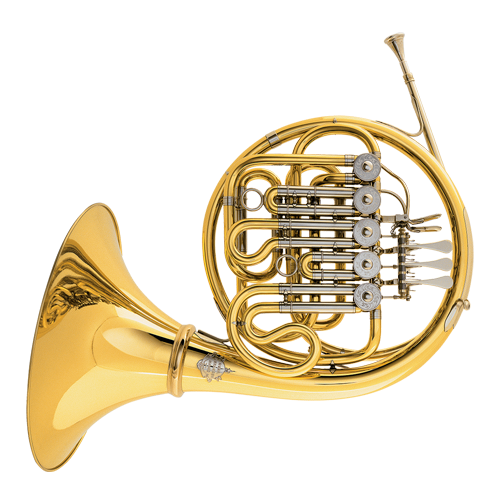 A single Bb horn with a combined A/stop valve with a manual rotor. This rotor is turned by hand for either an A valve (same length as the 2nd valve) or stop valve (which adds the extra small bit of tubing. This horn could have an F-attachment, which would be used by removing the A/stop valve and adding in the F-attachment slide.

Keep in mind also that while the F-extension allows you to play open F-horn notes, the three “main” valves are not quite long enough to use standard F horn fingerings, so while you can use them to get some lower notes than you could otherwise obtain, you can’t use normal F horn fingerings.

This chart assumes that your double horn “sits” in F (that is, you press down on the thumb valve for the Bb horn), and “T” denotes using the trigger to switch to the Bb horn.

Generally speaking, you’ll switch from the F horn to the Bb horn on the second space Ab (or G#) in the treble clef. However, there are some notes in the lower register (especially low D and Db) that work much better on the Bb horn. As you become more comfortable with Bb horn fingerings in the mid and low register, you may also find certain technical lines work better on the Bb horn.

The fingerings for a single F-alto horn and mellophone are the same since they are essentially the same instrument with a different wrap and tapers.

Be aware that F alto horns (as well as descant and triple horns) are very sensitive to right hand position, and a slightly lazy or out-of-place right hand will cause major intonation inconsistencies on these instruments.

While most single F-alto horns are traditional, three-valve instruments, there are some that include thumb keys. I have an Alexander F alto with a thumb valve that has a half-step or ¾ tone setting. Setting it to ¾ of a tone, and depressing all the valves will give you the harmonic series of an open Bb horn. I haven’t seen this feature on other F alto horns, although some do have Bb extensions in the same way they Bb horns have F extensions. 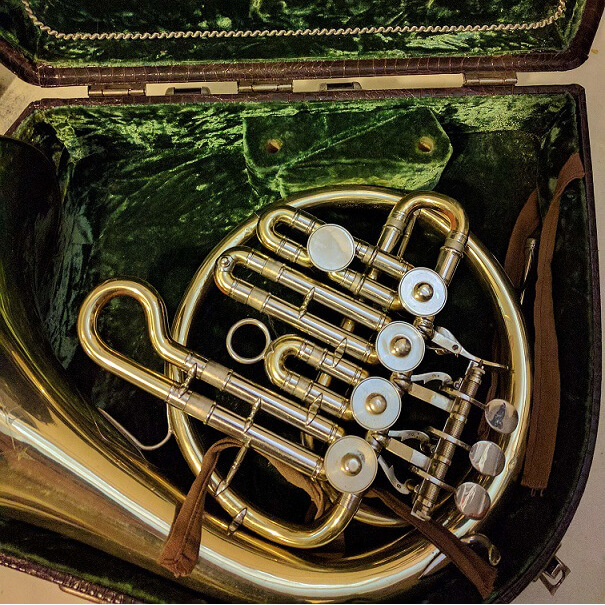 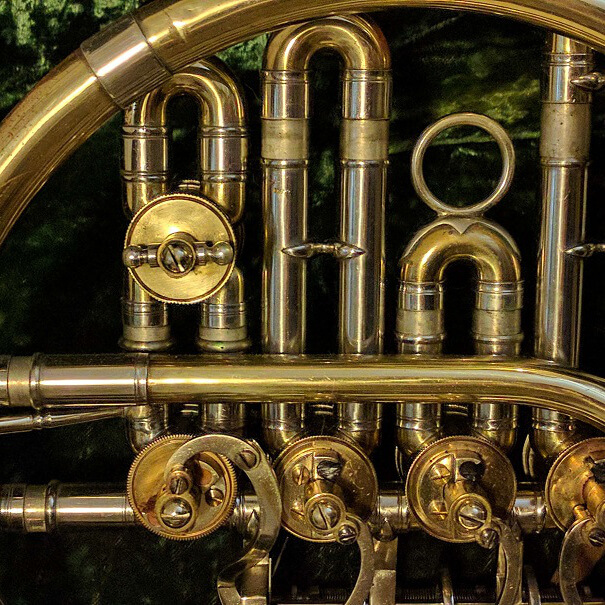 The manual rotor on the first valve closed. Note it’s the same length as the 2nd valve slide, and so is an E valve in this configuration. 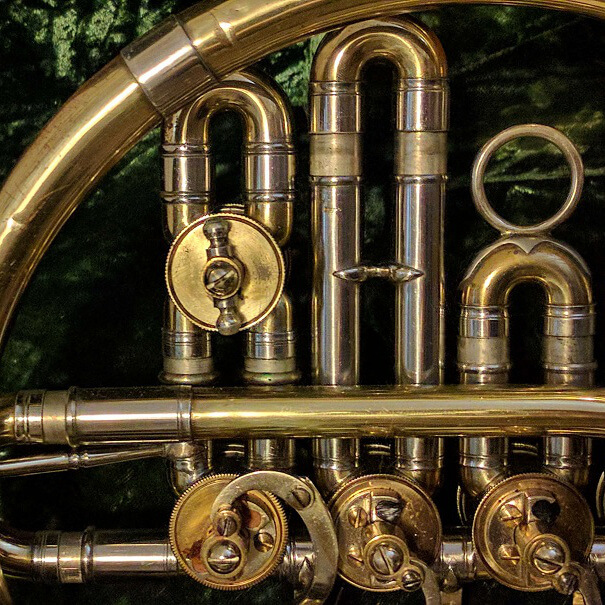 The manual rotor open. It’s not quite as long as the first valve slide (which would be stopping-valve length for an F-alto), but this valve (plus the other three) do make a good open Bb harmonic series.

Generally, F alto horns don’t need stopping valves. This is because lots of repertoire that uses a single F alto horn doesn’t require hand stopping, and the transposition for F alto stopping is relatively easy – finger notes one whole step lower (as opposed to a half step for the normal length F horn).

Like Bb horns, double descants can have an A-extension, a stop valve, an F-extension, or any combination of these. Many times descants that have all these will have them combined into one valve, so it’s not always possible to use them completely independently, like with the single Bb horns mentioned above. Having the F alto horn does give you some more options in the lower register, though.

Additionally, note that while most descant horns have stopping valves, these only work on the Bb side of the instrument. This is because hand stopping on the high F side requires the relatively easy whole step down transposition (as opposed to the half step for the regular F horn)

Similarly, the F extension only works on the Bb side of the horn and while you can come up with some creative fingerings for the low register, they won’t be the same as regular F horn fingerings.

A Paxman descant with an stop valve/F attachment with a manual change valve.

An Alexander compensating descant with a separate F extension and Bb stopping valve. It’s hard to see the two triggers, but note the fourth valve for the pinky.

The triple horn, being a relatively new design (at least from a practical standpoint) doesn’t yet have the standardization of fingerings that the double horn (or even double descant) has.

I think part of the reason for this is the wide range of triple horn designs and quality. The different valve layouts and taper configurations can cause different models to play drastically differently. The triple horn is all about compromises, and different compromises mean different preferred fingerings.

Additionally, some triple horn models have F alto sections, while some (most notably Englebert Schmid) use Eb alto for the highest horn. The Eb alto idea does have some advantages, but many players (myself included) still prefer the F alto horn. Since I’m not very familiar with the Eb alto horn, I use F alto fingerings for my chart.

On my particular instrument (a Paxman 75M) I use the F alto side as more of a color/timbre shift than a high-note option. Sometimes I like to use the low F side quite a bit from third space C to high G for a specific tonal color.

On my horn, I find the F alto side is a great for lighter tone colors, while low F side has a nice, slightly brassy character when pushed. The Bb horn is somewhere in the middle of the two.

There are many makers of triple horns that strive to match the horns so that they all play and sound alike (at least, as much as possible). This is certainly a valid philosophy, but I don’t think that any maker has gotten it 100% right.

If you’re going to play a triple horn, there are going to be compromises. It’s important that you are aware (and okay) with them before buying.

You can always get in touch with me using one of the methods on my contact page. Additionally, I offer horn lessons both in-person and online for all levels of students!